THE KING DOES NOT LIE 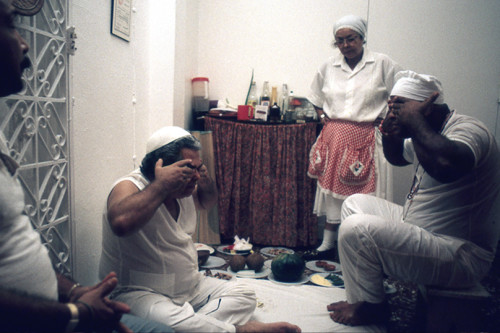 Filmed in Puerto Rico, the documentary shows the initiation of a Santeria practitioner. This Afro-Caribbean religion derived from Yoruba tradition is widely practiced, especially in Cuba and in Puerto Rico. Through the initiation ceremony the adept develops a direct correspondence with Shango, thunder god, owner of the sacred drums. Sacred stones are washed in leafy waters for ritual purification. On the third day the community gathers to witness the divination session in which the initiate receives his new name, “Oba Ko Puro,” which in the Yoruba language means “The King Does Not Lie.”

This website uses cookies to improve your experience while you navigate through the website. Out of these, the cookies that are categorized as necessary are stored on your browser as they are essential for the working of basic functionalities of the website. We also use third-party cookies that help us analyze and understand how you use this website. These cookies will be stored in your browser only with your consent. You also have the option to opt-out of these cookies. But opting out of some of these cookies may affect your browsing experience.
Necessary Sempre abilitato

ACCETTA E SALVA
You cannot copy content of this page